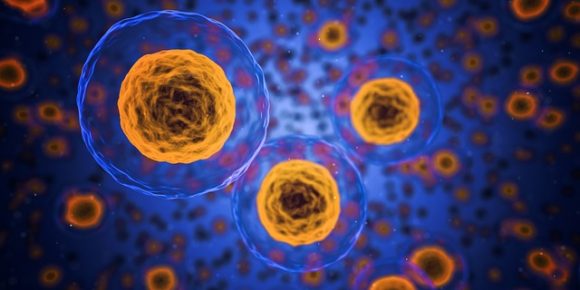 What is a stem cell?
A stem cell is an undifferentiated cell that is capable of developing into any tissue in the human body. This makes them immensely useful for future medical application such as tissue repair and regeneration.

The cells that haven’t differentiated and still possess the ability to multiply and produce infinite replicas of themselves are known as stem cells. On the other hand, differentiated cells only divide for a finite number of times and break down subsequently. A stem cell, on division, can either become a differentiated cell (stomach cell, red blood cell) or remain a stem cell.

For a cell to be categorized as a stem cell, it must display the ability of indefinite self-regeneration to create progeny that is identical to the starting cell. Although cancer cells divide in the same manner, the multiplication occurs in an uncontrolled fashion which is not the case with stem cells. The cell division in stem cells is extremely regulated. Another trait for stem cells is that they can produce a specialized cell type that develops into a tissue of a healthy organism.

These undifferentiated cells can develop into any tissue and serve important functions in the body. Nearly every cell in the human body is differentiated and can only perform a specific function in a specific organ. For instance, epithelium cells in the stomach are particularly designed to produce gastric acid that helps in the digestion of food. All organisms begin as a single cell called a zygote (fertilized egg). The zygote divides in a controlled manner to produce multiple cells called an embryo that eventually start to differentiate and assume a specific function in the body. This mechanism is known as differentiation.

Why are stem cells important?
Given that stem cells can develop into various types of cells, it is believed that they can be used for understanding and treating diseases. Scientists have been using stem cells to:

Types of stem cells
Based on the source of their extraction, stem cells can be categorized into three types, each serving a different purpose:

1.Embryonic stem cells
The cells obtained from human embryos are known as embryonic stem cells or Pluripotent stem cells. The female egg is fertilized in-vitro instead of inside the human body. Once the embryo is 3-5 days old, stem cells are extracted. The extraction is done before cell-differentiation starts. These cells can grow into almost any other kind of cell in the body.

Pluripotent stem cells are yet to be used for curative purposes in human beings because a lot of the initial animal studies revealed an undesirable development of solid tumors. However, currently, many commercial companies are under negotiation with the FDA for moving on to human trials.

3.Umbilical cord blood stem cells
These stem cells are obtained from the umbilical cord or placenta after childbirth. The cells can be stored cryogenically for use if the need arises in the future. This technique has been successfully used to deal with ailments like blood cancers and some genetic blood disorders in children.

4.Amniotic fluid stem cells
Stem cells can be harvested from the amniotic fluid that surrounds a fetus growing inside the uterus.

How is stem cells therapy beneficial?
Stem cell therapy is an emergent research field. It has introduced innovative changes to the therapeutic field and more research and technology provides stem cell research with endless opportunities. Scientists expect that stem cells can advance heart function by integrating newly developed beating cardiac cells into the heart muscle to generate greater force. Cardiac cells developed from embryonic stem cells have shown to form functional heart muscle in animals. There was a slight improvement in the cardiac function after injecting cardiac cells developed from embryonic stem cells. The improvement in the function can be partially attributed to the incorporation of new heart cells.

Want to write an essay on stem cell therapy? Technical writing experts are the best people to turn to for this as they have deep knowledge about the studies and developments related to this field.