An introduction to Louvre Abu Dhabi 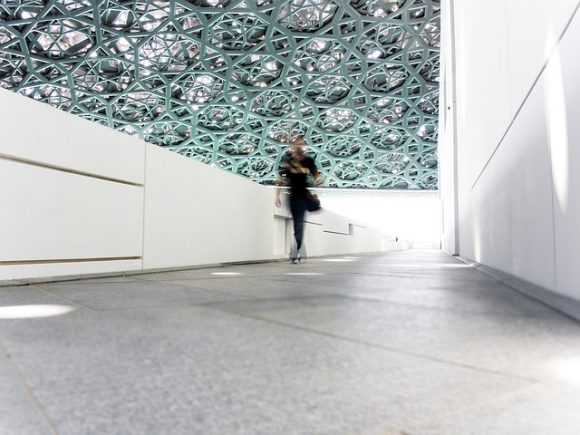 The museum is a part of thirty year agreement between the city of Abu Dhabi and the French Government. The museum’s location is on the Saadiyat Island. It is about 24.000 square meters and 8000 square meters of galleries. This feature makes it the largest art museum in the peninsula of Arabia. The final cost of construction of the museum is about 600 million Euros. Artworks from all over the world are showcases in this museum with special focus on bridging the gap between the western art and the eastern art (Paleologos, Caratelli and El Amrousi 2016).

History
The establishment of this museum was approved by the parliament of France on 9th October 2007. Engineers working at BuroHappold Engineering formed the architect for the building. the major architect of the museum was Jean Nouvel. The museum is also part of the tourist and cultural development complex that is planned to include other museums as well. As per the government of the UAE interact the museums agency shall work in connection with the Tourism Development and Investment company that is behind the formation of the saad island (Ajana 2015).

Design
The Saadiyat Island cultural district plans to unite the largest cluster of cultural assets. Moreover, Louvre Abu Dhabi is intended to include the Zayed National Museum that is designed by the United Kingdom. This museum is one of the largest museums of the world and it also includes art centre that is designed by Zaha Hadid by using the concept of Tadao Ando (Molotch and Ponzini 2019).

Architecture
The museum is designed by a floating culture in the form of dome. A web patterned dome shaped structure allows the sun to filter through by creating an overall effect to represent the rays of sunlight by passing the date palm trees in the oasis. The total area under the occupancy of the museum is about 24,000 square meters. The permanent collection shall occupy about 6000 square meters and there are temporary exhibitions that take about more than 2000 square metres (Gombault and Selles 2018).

Engineering
BuroHappold Engineering is the company that provided different engineering services to the project all over the world. The same included structural engineering and geotechnical engineering. The structural engineers realized the importance of floating dome of different sizes and produced the same with eight layers allowing sunlight to pass through the same partially. A team of geotechnical engineers who designed water-light basement and pools as part of the galleries giving an illusionary look. The basement gave an illusion of museum in the sea while making artwork and other artefacts for visitors (Wakefield 2017).

On September 22, the final element of the canopy was made making important changes in the construction phase of the museum. In the month of October, the TDIC announced that the museum is more than fifty percent completed.

Visual Identity
Three languages has been used in the system for the museum and the same was later implemented in the Arabic and Roman script. The typeface has been chosen as one of the best methods for identifying the roman texts. The design of the pictograms is inspired by the architecture of the museum and is created by the light of filtering the gigantic dome.

Collection
People have raised questions on the nature of the artworks that is displayed in the museum. Nonetheless, as per the National, the type and the nature of works that is displayed in the museum is affected by Muslim ideologies in the country. It has also been noted that the museum shall highlight different type of French museums including the Louvre, Musée d’Orsay and Palace of Versailles.

In the year 2012, the museum started to collect photography making their first acquisition in the field. The museum also acquired sculpture of Bactrian princess belonging to the third millennium. Further details of the museum were opened in the year 2014 with many important works that was to be loaned under the agreement of the France Museums and the Louvre including the Leonardo Da Vinci’s painting (Khalaf 2017).

Exhibitions
The Louvre Abu Dhabi started sharing its collection with the public with the exhibition named “Talking Art Louvre Abu Dhabi.” The exhibition presented the first nineteen acquisitions of the world including the Mamluk holy Quran belonging to the 19th century. It also presented Domagnano and Mondrian’s composition with blue, yellow and red. The second exhibition opened the space of the saadiyat island in may and ended the same in the month of August. The first large scale preview of the collection was featured in about 130 works and was acquired by the government of Abu Dhabi.

The museum is a part of thirty year agreement between the city of Abu Dhabi and the French Government. The museum’s location is on the Saadiyat Island. It is about 24.000 square metres and 8000 square metres of galleries. This feature makes it the largest art museum in the peninsula of Arabia. The final cost of construction of the museum is about 600 million Euros. Artworks from all over the world are showcases in this museum with special focus on bridging the gap between the western art and the eastern art (Wakefield 2017).

Conclusion
The museum has been working with the Paris University to set up a master program for the professionals in the museum so that they can be trained and helped to respond the local needs.  The museum has sparked opposition with the expansion in both artistic as well as academic circles in France. One of the leading French historians Didier Rynker has presented the opposition. He insisted that museums should not be made available for sale. The museum has been accused for behaving like a corporation to make profits. In the middle of accusations about worker abuses, the architect of Louvre Abu Dhabi defended the treatment of the construction workers stating that the working conditions were better than some European countries.

Gombault, A. and Selles, D., 2018. Louvre Abu Dhabi: A Radical Innovation, But What Future for French Cultural Influence?. International Journal of Arts Management, 20(3).