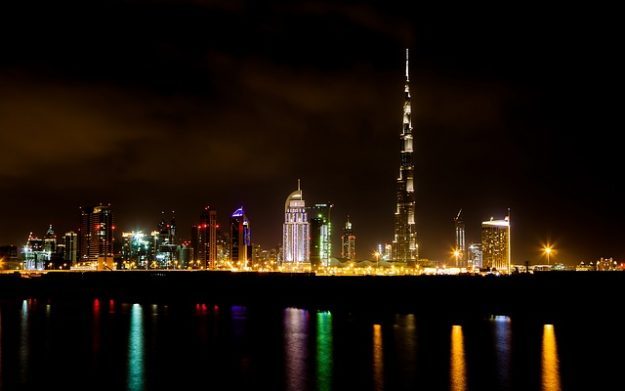 We are living in the era of technological marvels where innovation manifests itself in the form of ATM machines, Smartphones, Internet of things, 3-D printers, gigantic skyscrapers, and what not. The engineering wonders have evolved significantly from the time when the first high-rise ever was built to the most advanced superstructure, better known as Burj Khalifa in Dubai, the world’s tallest building.
Started in 2007 and opened on January 14th, 2010, it took nearly three years to finish the construction of the tallest tower in the world. At 2,722 feet (829, meters) tall, the building is visible from anyplace in Dubai. The tower has 163 floors in all and each floor is about 5 meters tall.

Burj Khalifa looks an inverted stalactite (a column of crystals hanging from the roof of a cave). The structure is in the shape of a cone made of steel and glass. It is touted as the “city within a city”, implying there are districts, parks, fountains, and passages inside the tower. The world’s tallest building was designed by Adrian Smith of Skidmore, Owings & Merrill. The inside of the high-rise is as splendid as the outside. The world’s leading designers planned the interiors of the building. For instance, Giorgio Armani is the brain behind the spectacular interiors of the Armani hotel located across 1st to 39th floors of Burj Khalifa. The air-conditioned insides of the colossal tower smell like heaven, thanks to the aroma that was created specifically for this wonderful ambience. There are 57 elevators that work night and day transporting visitors to their desired floors.

To keep the glass surface sparkling, it is cleaned every single day. The concrete used in construction was custom-made exclusively for Burj Khalifa. The tower has three entry gates to allow admittance to this vast structure. There is a large man-made lake measuring up to 12 hectares at the base of the building.

Design of the building
Amazingly, the inspiration for the triple-lobed footprint comes from “Hymenocallis”, the desert flower which grows in Dubai. The structure of the tower is influenced by Middle-eastern and Islamic architecture that gave rise to its tri-axial construction. The building has three arms placed around a core in the shape of letter Y. The hexangular core offers the necessary resistance against torsion like a closed pipe. As the structure rises up from the plane desert land, it tapers through the twenty-six spiral levels narrowing the cross-section of the column as it twirls skywards.

The Y-shape design allows maximum outward view of the Persian Gulf and lets natural light to reach to the inward areas of the residential as well as commercial spaces. Another important idea behind choosing this shape is to decrease the effect of the wind and keep the structure safe and support project management. As expected, the tower turned out to be a rigid structure that can hold itself laterally and endures twisting.

The thickness and size of the column walls were adjusted to decrease the impact of concrete shrinkage and creep. To decrease the impact of differential column curbing between internal walls and periphery columns, the size of the periphery columns was modified such that the gravity stress acting on the tower due to its own weight is equal to the pressure on the internal walls.

Multiple rounds of wind tunnel tests were conducted during the building of the tower. The wind tunnel data was then merged with the dynamic properties of the edifice to obtain its dynamic response to wind and the effective wind force circulations on the whole. As the designing of the tower approached its conclusion, a more precise aero-elastic model was prepared. At the highest point of the Burj Khalifa, it can swing up to 1.5 meters.

Challenges faced during the construction
Needless to say, the construction of this superstructure witnessed numerous structural problems. In order to ensure the safety and success of the chosen design, the engineers and architects subjected a model of the building to the extensive analysis program. The base of the tower is constructed in groundwater that has higher concentrations of chloride and sulfate than those present in the sea water. In order to derive higher strength and reduce porous concrete covering over the steel blocks, a regulated permeability structure was used. Moreover, a special concrete mixture was formulated to withstand the impact of the chemicals in the groundwater.

These aggressive conditions called for a stringent program of measures that ensured the robustness of the substructures. Some of the steps applied include special waterproof layers, enhancing concrete thickness, adding corrosion checkers to the concrete mixture and using a titanium mesh to set up a cathodic protection system. An extremely daunting issue in building a concrete structure was to make sure that the concrete could be pumped to the maximum degree to reach the world’s greatest heights, particularly in high temperatures during summers. For this purpose, four basic special mixtures were formulated to enable pumpability at reduced pressures when the tower gets higher.

When the construction of Burj Khalifa ended, it became the highest structure in the world. Undeniably, it is a magnificent accomplishment in the implementation of modern technologies and resources integrated with the top architectural design idea and the tectonic design, making Burj Khalifa one of the greatest superstructures known to mankind. The fact that the building stands tall in its glass and steel body is a miracle in itself, bearing in mind how it beats back the gravity, gale, and other natural disasters. With an opulently oriental scope, Burj Khalifa was conceived and constructed to symbolize that nothing is impossible.

If you are studying in the city with the greatest structure ever built on the Earth’s surface, it is certainly something to be proud of. Despite living in such a great city and being a part of a prestigious institute if your essay writing assignment is spoiling the fun, then you should do something about it.  Arab essay experts can create flawless essays for your coursework and help you understand complex concepts. Fight away your apprehensions of writing an excellent piece by taking assistance from world’s renowned writers and editors.