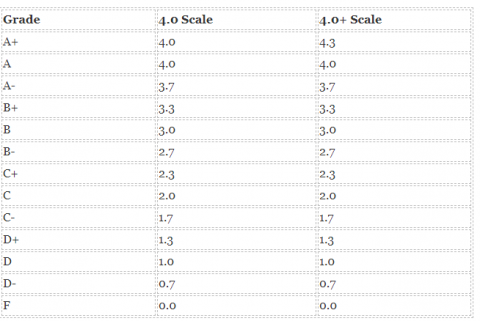 Grade point average (GPA) is a score average calculated on the letter grades you make each semester. Each letter grade is given a numerical value from 0-4 or 5 points; it varies subject to your institution’s scale. Schools also look at cumulative GPAs, which indicate your average GPA over past few years of schooling, when you graduate or apply to an institute of higher studies.
It is most likely, that in your high school classes, your final finishing grades are identified as alphabetical letters (A-, B+, etc.) or as percent (92, 85, etc. out of 100). A GPA, first translates those letters or percent into numbers, and then averages these numbers collectively.

Different Methods of Calculating GPA
Higher schools in the U.S. use different methods of computing point average because sometimes these systems are a little different from each other. Both 4.0 Scale and 4.0+ Scale are used. Confirm which scale is implemented in college you enter. Now let’s study how GPA is calculated by exercising different methods.

As you can comprehend from the above table, determining grade point average using 4.0+ Scale system will be different if a student has excellent accomplishments.

Weighted Point Average
Presently, many schools measure grade point average with the help of 4.0+ scale as they use weighted scale. Weighted value is calculated taking into account quite a few factors like assignments difficulty, level or class. For example, students from elementary school having all “A” grades will obtain 4.0, while students from high school getting all “A” marks will achieve 5.0. The classifications of challenging courses are also different in each school. If school offers AP or IB classes, this means that Honors classes are available. Extra difficult classes have additional credits. As a result, 4-credit class is valued more than 2-credit class. Your schedule may look like this:

By looking at the above table, you may observe the following:

If you want to calculate weighted value with AP, use the same formula. You only should work out weighting AP classes, but not credits. If you apply the same data to calculate for Honor Classes, make use of this method:

Some colleges use more specific grading systems when they assess students on a 0-100 scale instead of using letters. In this event, a student who’s got 90 points on average would have point average of 3.5. However, another student having 92 points would get the value of 3.7. This gives a chance to evaluate caliber of students in a just a few easy steps.

How to calculate unweighted GPA

The first and foremost thing to do in order to evaluate a grade point average is to convert each of the final class grades you’ve achieved until now in high school into the right decimal.

Here is the standard unweighted scale for achieving this:

Then, execute the calculation in the following sequence:

The Difference between Weighted and Unweighted GPA

There are two leading types of GPAs: weighted and unweighted. When schools use unweighted GPAs, they use a scale that goes from 0.0 to 4.0 and doesn’t take the complex level of classes into consideration. However, several schools use a weighted GPA model, which takes class complexity into account by using a scale that goes from 0.0 to 5.0. This gives higher numerical values to grades achieved in Honors/AP/IB classes. For example, Jack gets an A in standard-level US History while Susan gets an A in AP US History. With unweighted GPAs, both A’s are considered equivalent—i.e. each becomes a 4.0. On the other hand, with a weighted GPA, Jack’s A would convert to a 4.0, while Susan’s A would translate to a 5.0 to show that her class took a lot more additional determination and effort to top.

The key dissimilarity in calculations of weighted and unweighted values is that each grade in the calculation of weighted point average is tight to class levels. Hence, by adding 0.5 to scale for Honor classes of medium level and 1.0 for AP classes of high level, you can convert point average to regular subjects. Mind that the difference between weighted and unweighted values can be significant.