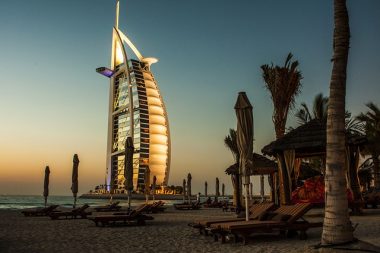 Dubai is one of the most beautiful cities in the world. This city is situated in the United Arab Emirates and is quite famous for its lively nightlife, extremely modern architecture, luxurious shopping, and lifestyle.
This city is not just famous all across the globe for this but is also known for the architectural wonder known as Burj Khalifa. It is a 160-story observational deck and skyscraper. There is another architectural wonder in Dubai and that Burj Al Arab. It is a luxury hotel in Dubai and is one of the highest luxury hotels in the world. There are many interesting facts about this architecture. And in this academic writing piece, readers will be able to learn about all those interesting points.

An Introduction to Burj Al Arab

Burj Al Arab is a luxurious hotel which is situated in Dubai, United Arab Emirates. The name of this hotel in Arabic can be directly translated to ‘tower of the Arabs’. This is one of the tallest hotels in the world and ranks on the 5th spot of that list currently. It is quite interesting to note that almost 39% of the total height of this hotel is not classified as the type of space which can be occupied. This hotel is built on a private island which is almost 920 ft. or 280 m away from Jumeirah Beach. This hotel is connected with the help of a private curving bridge to the mainland. The shape of this hotel was designed in such a way that it ends up resembling the shape of a sail of a large ship. There is also a helipad near the roof of the hotel. And that helipad is situated at a height of around 689 ft. or 210 m above the ground.

It might be quite interesting for the readers to note that the area in front of the beach where Jumeirah Beach Hotel and Burj Al Arab are located was previously known by the name of Miami Beach. The area in front of the beach was named like this because of the fact that the land was previously occupied by the Chicago Bridge & Iron Company but was later reclaimed by the owners of both the hotels. The specific points of interest about this hotel are organized in the form of a list for the ease of understanding of the reader. All those important points are:

The main architect behind the design of the Burj Al Arab is Tom Wright. He is the architect who worked with the multidisciplinary consultancy company named Atkins. Tow Wright is currently holding the position of co-founder at the organization named WKK Architects. The task of construction and design of Burj Al Arab was mainly managed by Rick Gregory, who is also a Canadian engineer working for the organization named WS Atkins. There are many experts who also believe that this luxurious hotel is quite similar in design to the Vasco da Gama Tower which is located in Lisbon, Portugal.

The construction of the island first began in 1994 and involved almost 2,000 construction workers at the peak working hour. The island was built to resemble the billowing spinnaker sail of a yacht which is classified as being J-class. Even before the construction of this hotel began, it was believed that this hotel would be one of the main attractions of Dubai and was also compared to the iconic structures like Big Ben, Eiffel Tower, and the Opera House. According to the data, this building opened up in December 1999 for the public.

According to the official reports, the atrium of the hotel is 590 ft. or 180 m tall. This hotel is so incredibly luxurious and has so many features to offer to its customers that it is also rated as being the only ‘7-star’ hotel in the entire world. The major themes which are associated with the hotel are eclectic, baroque, and palatial. The hotel was decorated by the incredible famous Chinese designer named Khaun Chew. He was commissioned to decorate the hotel by keeping the four main elements of the ancient world in mind like earth, wind, fire, and water. This incredibly talented designer has also decorated many other high profile hotels which also have a very good reputation and brand value.

The ancient element of water is represented with the help of the fountains and aquariums which are present in the hotel. The element of fire is included in the main entrance fountain of the hotel and air is presented through the steam of the main entrance fountain. And the last ancient element of earth is presented through the precious stones and marbles which are used throughout the hotel. According to the official reports, 2,400 meter square of marble and 2000 meter square of gold foil is used in the hotel. There are two famous restaurants which are present within the hotel. And the names of the restaurants are Al Muntaha and Al Mahara respectively.

These are all the key points which an individual should be aware of in regards to this luxurious hotel.

The Reception of the Hotel

The hotel, since it was first opened for the general public, has garnered both praises and criticism. However, it has been widely agreed that the design of the hotel is extremely pleasing and construction is also quite spectacular. The hotel has also been regularly praised for the way in which the decoration has been done. The main critic of the hotel has been that money and style has been chosen over practicality. Apart from this main critic, there does not seem to any major complaint with the design, decoration, architecture, or any other major aspect of the hotel either in terms of its services, its physical structure, or its overall policy or method.

Burj Al Arab is the only hotel in the world which has been given the ‘7-star’ rating. This hotel is located in Dubai, United Arab Emirates and is the fifth tallest hotel in the entire world. Almost 39% of the total height of the hotel cannot be occupied by the guests. It is also quite interesting to note that this hotel is built on an artificial island and currently has over 200 rooms. The main architect who is behind the entire idea of the structure of this hotel is Tom Wright. There were also many other architects of the Atkins organization working under him. Apart from these facts which are related to the hotel, it is also quite interesting to note that the hotel has been received extremely well both by the media and the general public. This is not to say that there has been no criticism of this hotel. Many have criticized that style and money was chosen over practicality during the construction of the hotel.